How to use an Ardiuno Analog Sensor

The following guide provides you some useful information about Arduino analog sensor (also known as Potentiometer). This sensor can be used to adjust the brightness or the blinking rate of an LED. This document also ensures a step by step guide about how you can easily manage the analog sensor from your computer by using Ozeki 10. So, let's get started with the basic definitions.

What is an Arduino analog sensor?

The Arduino analog sensor can be also called as potentiometer. This sensor is just a simple knob that can be directly connected to your Arduino. The sensor provides a variable resistance that the Arduino board can handle as an analog value. With this value, the board can adjust, for example, the brightness value of a connected LED.

How to use an Arduino analog sensor?

As we turn the shaft of the analog sensor, it changes the resistance on either side of the wiper which is connected to the middle pin of the potentiometer. The board reads the adjusted resistance and converts it to an analog value. This value is a number between 0 and 1023 which represents how much resistance is on the wiper between 0 and 5 volts. 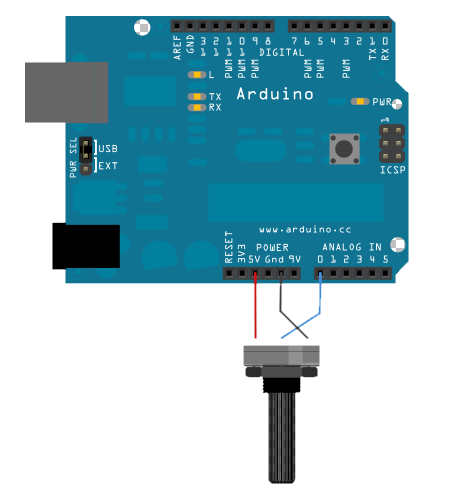 How to use an Arduino Analog Sensor in Ozeki

The arduino sensors and Ozeki will communicate over the USB port using the Ozeki Analog sensor protocol. This protocol makes it possible for you to use the sensor directly on your PC. You will be able to control this sensor through the web based user interface or you will be able to communicate with it using Ozeki Chat. You can read more about chat control on the following page.

How to communicate with the Analog sensor using chat

The system we suggest consists of an analog sensor, that is wired to the analog port of your Arduino. The Arduino will be responsible for reading data from this sensor in real-time. The brain of the system will be running on a PC (Figure 2). On the PC, Ozeki 10 will be able to manage the communication. You can easily run Ozeki 10 using a webbrowser.

Videos below will show you how to wire your Analog Sensor (e.g. potentiometer). It is advised to read measurements with your Ozeki Software as you can see in the last video. Finally, you can store the sensor data in any SQL database (Figure 1).

Step 1 - Wire the analog sensor to your Arduino

You can see how to wire the analog sensor (such as potentiometer)
to any of the following boards:

Step 2 - Upload the code to the Arduino

In order to configure your analog sensor (attached to your Arduino) in Ozeki 10, that is installed on your computer, you need to open the graphical user interface (GUI) of Ozeki 10. You can open the GUI by entering the URL of the computer into your webbrowser. For example, if our PC has an IP address of 192.168.1.5, we would enter http://192.168.1.5:9513 into our webbrowser.

The Analog Sensor can communicate with Ozeki through the following protocol.