How to use an Arduino Gyroscope sensor

What is a gyroscope sensor?

The gyroscope measures rotational velocity or rate of change of the angular position over time, along the X, Y and Z axis. The outputs of the gyroscope are in degrees per second, so in order to get the angular position, we just need to integrate the angular velocity. Briefly, it can measure gravitational acceleration along the 3 axes and using some trigonometry math we can calculate the angle at which the sensor is positioned

How does an Arduino gyroscope sensor work?

The accelerometer measures the acceleration along one direction, while the gyroscope measures the angular acceleration on one axis. The analogic pins are not set on INPUT because it's their default setting. The values read by the analogic pins will be sent to the serial port. Open the Serial Monitor, move the sensor and try to see how the values change. Accelerometers can be used for fun projects, for example, to realize a game controller.

How to use an Arduino Gyroscope sensor? 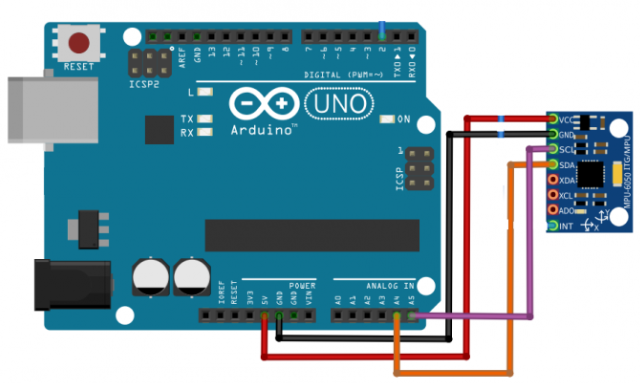 How to use an Arduino Gyroscope sensor in Ozeki

MPU6050 connections are used for transferring accelerometer, gyroscope, angle and temperature data from the MPU6050 chip to your Ozeki software. You can select what to do next with the gathered information. For example you can forward it to another connection or analyze it in real-time before storing it in an SQL database. To use the Gyroscope sensor in Ozeki, you first need to download Ozeki Robot Developer. Ozeki Robot Developer will install the Arduino libraries needed to use this sensor efficiently.

The arduino sensors and Ozeki will communicate over the USB port using the Ozeki Gyroscope sensor protocol. This protocol makes it possible for you to use the sensor directly on your PC. You will be able to control this sensor through the web based user interface or you will be able to communicate with it using Ozeki Chat. You can read more about chat control on the following page.

How to communicate with the Gyroscope sensor using chat

The system we suggest consists of a gyroscope sensor, that is wired to the analog port of your Arduino. The Arduino will be responsible for reading data from this device in real-time. The brain of the system will be running on a PC (Figure 2). On the PC, Ozeki 10 will be able to manage the communication. You can easily run Ozeki 10 using a webbrowser

Step 1 - Wire the gyroscope to your Arduino

You can see how to wire the accelerometer and gyroscoper to any of the following boards:

Step 4 - Configure your gyroscope in Ozeki 10

In order to configure your gyroscope sensor (attached to your Arduino) in Ozeki 10, that is installed on your computer, you need to open the graphical user interface (GUI) of Ozeki 10. You can open the GUI by entering the URL of the computer into your webbrowser. For example, if our PC has an IP address of 192.168.1.5, we would enter http://192.168.1.5:9513 into our webbrowser.

The Gyroscope Sensor can communicate with Ozeki through the following protocol.