How to use an Arduino Joystick

In the following guide, you will learn about the Arduino Joystick. The Analog Joystick is similar to two potentiometers connected together, it can be very handy for retro gaming, robot control or RC cars. The guide contains some basic information about how an Arduino joystick works, then you will be able to see how you can work with a joystick connected to your Ozeki 10. First, let's start with the basics of Arduino joystick.

What is an Arduino Joystick?

The joystick in the picture is nothing but two potentiometers that allow us to messure the movement of the stick in 2-D. Potentiometers are variable resistors and, in a way, they act as sensors providing us with a variable voltage depending on the rotation of the device around its shaft.

How does an Arduino joystick work?

How to use an Arduino joystick?

To work with an Arduino joystick, you need to connect some wires to your Arduino as the wiring diagram (Figure 1) shows it. The GND pin from the joystick needs to be connected to the ground (Gnd). The +5V pin goes to the 5V pin of the Arduino. Then, the VRx and VRy pins go to two analog inputs and lastly, the SW pin connects to a digital input. 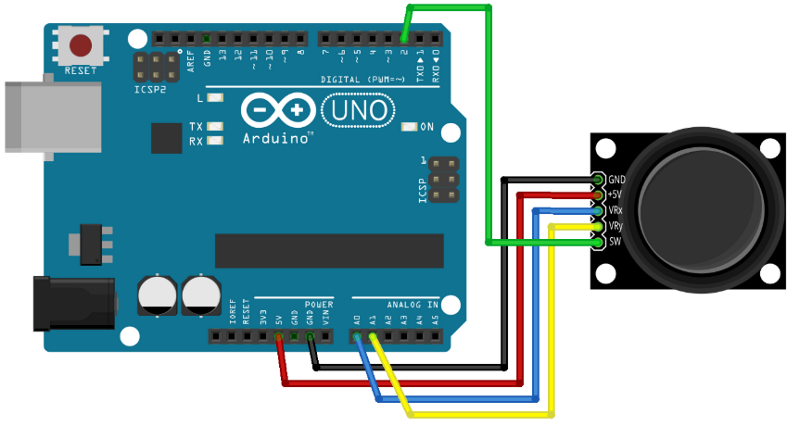 How to use an analog joystick in Ozeki

Analog Joystick connections guarantee that all of the joystick interactions are forwarded to a selected connection in your Ozeki software. You can test your own joystick through the GUI as you can see in the 3rd video below. Most analog joystick has a top button as well which can be handled by this connection. To use the Arduino Joystick in Ozeki, you first need to download Ozeki Robot Developer. Ozeki Robot Developer will install the Arduino libraries needed to use this sensor efficiently.

The arduino joystick and Ozeki will communicate over the USB port using the Ozeki Joystick protocol. This protocol makes it possible for you to use the joystick directly on your PC. You will be able to control this joystick through the web based user interface or you will be able to communicate with it using Ozeki Chat. You can read more about chat control on the following page.

How to communicate with the Joystick using chat

It is important to understand chat control, because when you build a robot, the way you wish to control this joystick is by sending and receiving messages. If you open the Ozeki Robot Developer app, you will see, who you can write a C#.Net program to work with this joystick.

The system we suggest consists of a joystick, that is wired to the analog port of your Arduino. The Arduino will be responsible for reading data from this device in real-time. The brain of the system will be running on a PC (Figure 2). On the PC, Ozeki 10 will be able to manage the communication. You can easily run Ozeki 10 using a webbrowser

Step 1 - Wire the analog joystick to your Arduino

You can see how to wire the analog joystick to any of the following boards:

Step 4 - Configure your joystick in Ozeki 10

In order to configure your joystick (attached to your Arduino) in Ozeki 10, that is installed on your computer, you need to open the graphical user interface (GUI) of Ozeki 10. You can open the GUI by entering the URL of the computer into your webbrowser. For example, if our PC has an IP address of 192.168.1.5, we would enter http://192.168.1.5:9513 into our webbrowser.

The Analog Joystick Controller can communicate with Ozeki through the following protocol.