How to use an Arduino RGB LED

This guide provides you some information about Arduino RGB LEDs and how you can use or control them with Ozeki 10. You will learn about the basic concept of RGB LEDs in the first part of the document, then, by following the step by step guide, you will be able to see that how you can control these RGB LEDs from your computer using Ozeki 10. So, let's start right now.

Stands for "Red Green Blue." RGB refers to three hues of light that can be mixed together to create different colors. Combining red, green, and blue light is the standard method of producing color images on screens, such as TVs, computer monitors, and smartphone screens.

What is an RGB LED?

How does an RGB LED work?

The RGB LED can emit different colors by mixing the 3 basic colors red, green and blue. So it actually consists of 3 separate LEDs red, green and blue packed in a single case. That’s why it has 4 leads, one lead for each of the 3 colors and one common cathode or anode depending on the RGB LED type. The cathode will be connected to the ground and the 3 anodes will be connected through 220 Ohms resistors to 3 digital pins on the Arduino Board that can provide PWM signal. We will use PWM for simulating analog output which will provide different voltage levels to the LEDs so we can get the desired colors. 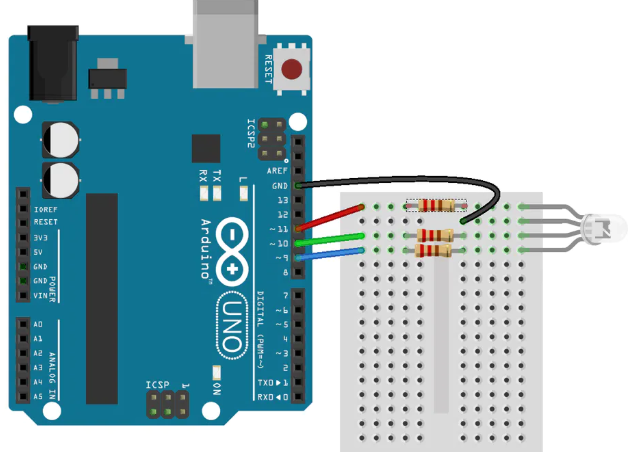 How to use an Arduino RGB LED in Ozeki

RGB LED controller connection easily controls the brightness and color of your RGB LED. Commands can be routed to your LED controller from any connection of your Ozeki 10. You can mix any color by using the correct scale of the 3 basic colors. Each color is scaled from 0 to 255. You can change brightness while keeping the color at the same time. To use the RGB LED in Ozeki, you first need to download Ozeki Robot Developer. Ozeki Robot Developer will install the Arduino libraries needed to use this sensor efficiently.

The arduino sensors and Ozeki will communicate over the USB port using the Ozeki RGB LED protocol. This protocol makes it possible for you to use the sensor directly on your PC. You will be able to control this sensor through the web based user interface or you will be able to communicate with it using Ozeki Chat. You can read more about chat control on the following page.

How to communicate with the RGB LED using chat

The system we suggest consists of an RGB LED, that is wired to the analog port of your Arduino. The Arduino will be responsible for reading data from this device in real-time. The brain of the system will be running on a PC (Figure 2). On the PC, Ozeki 10 will be able to manage the communication. You can easily run Ozeki 10 using a webbrowser

Step 1 - Wire the RGB LED to your Arduino

You can see how to wire the RGB LED to any of the following boards:

In order to configure your RGB LED (attached to your Arduino) in Ozeki 10, that is installed on your computer, you need to open the graphical user interface (GUI) of Ozeki 10. You can open the GUI by entering the URL of the computer into your webbrowser. For example, if our PC has an IP address of 192.168.1.5, we would enter http://192.168.1.5:9513 into our webbrowser.

The RGB LED Controller can communicate with Ozeki through the following protocol.